The Shoshone, a nomadic people, traveled annually between the Bitterroot Mountains of Montana and the Unita Mountains of northern Utah along the western slopes of the Wind River Range in Wyoming.  It is believed that the Shoshone in this area acquired horses in the early 1700’s from their relatives the Comanche giving them somewhat equal footing with their mortal enemies, the Blackfeet.  Due to the isolation of their territory, the tribe was spared any contact with the whites until they met Lewis & Clark in 1803.  Before the white men reached their homeland in the beautiful Rocky Mountain valleys, the Shoshone people lived for nearly 100 years in a life improved by the horse.

The introduction of the horse allowed the Shoshone to hunt much larger game.  The buffalo, being the largest game hunted, became a commisary for nearly all of the Indian’s needs.  Hundreds of items were made from every part of the buffalo; nothing went to waste.
Beaver, which were abundant in Shoshoni lands, attracted the first commercial ventures, starting the Era of the Mountain Men.  These adventurous young men left civilization not only to seek their fortunes, but to explore unknown mountains of the West.  Little did they know that the independence they sought would be the beginning of the end of the lifestyle of the Shoshone and other tribes who lived in the Rocky Mountain region.
By the 1800’s, the large numbers of traders and trappers travelling up the Missouri River brought increasing problems for the Indian tribes including disease, whisky and alcoholism.  While these trappers were exploring the upper regions of the Missouri and Yellowstone Rivers, others were working their way south of the Rockies to establish the Santa Fe Trail into the Southwest.  It was just a matter of time before the secluded territory of the Shoshone would be invaded.
These mountain men were not feared, but welcomed by the Shoshone people.  Trade was warmly received by the tribe because in the exchange for their furs, they received manufactured goods like blankets, beads, cloth, metal pots and pans.  The mountain men coexisted with the Indians in their mountain home, not only learning their ways, but teaching them the white man’s ways.  Many of these mountain men became leaders in different tribes and fought alongside their Indian comrades in battle with enemy tribes.
As the years went by and more and more white men came into the Rocky Mountains, the Indian time was slowly running out.  By 1840, the Era of the Mountain Men was just about over.  In 1842, a young brave named Washakie became leader of the Shoshoni who lived in the area of the Green River.  The son of a Flathead father and Shoshoni mother, Washakie would eventually help the Shoshone tribe through the biggest change they would make in their entire history.
Chief Washakie was able to foresee that the Indian would be forced to live in peace with the white man;  these invaders were bringing new pressure into his territory.  From the first meeting with the whites until his death in 1900, Chief Washakie never allowed his tribe to battle the whites; many times his young braves would argue that they must fight to save their lands and way of life.  The white men considered Washakie their friend and he was known by all who came in contact with him as one of “Nature’s Noble Men.”
The competition for the all-important buffalo had been a conflict among the Shoshone, the Blackfeet, the Lakota and the Crow long before the white men arrived.  Chief Washakie was able to secure peace with the Crow; thus his people were able to hunt in both the Wind River and Big Horn valleys. 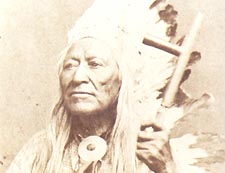 With the era of the fur trade and the Rendezvous a thing of the past, in 1843 Washakie and the Shoshone people faced yet another wave of people coming onto their land.  Jim Bridger, who had become a very good friend of Washakie’s, was building a trading post on the route now known as “The Oregon Trail.”  This post would resupply a great wave of newcomers in their westward migration.  Washakie’s people who travelled each summer to the Unita mountains crossed The Oregon Trail near Bridger’s fort.

During the next twenty-five years, Chief Washakie and the Shoshone, who camped near Fort Bridger, would watch the wagons pass on their way West.  Bridger and Washakie would recall the “shining times” when they shared the Wind River Mountains together.
In 1851, the United States government realized that something had to be done about the increasing problems between the Indians and the newcomers.  In order to secure safe passage for Oregon Trail travellers, they invited the Plains Indians to a “Great Smoke” at Fort Laramie.
A short time after the signing of the 1851 Laramie Treaty, it was clear to the Indians that the terms of the treaty would not be honored.  The destruction of the buffalo and constant flow of immigrants through Indian lands continued.
Washakie continued to restrain his people from waging war against the whites, but many of his braves left his band and joined Pocatello, a chief of the western Shoshone who continued to resist the whites.
By 1863, the military had subdued the majority of the Shoshone and Bannock Indians who remained in resistance.  These groups were worn down and could do nothing but accept whatever terms were offered to them by the government.
The Shoshone and Bannock boundaries were then roughly designated to be from the Snake River Valley south to the Unita Mountains and from the North Platte River, west to the Great Salt Lake.  This territory was made up of approximately 44,672,000 acres.  Annuity payments made up of goods deemed suitable by the President of the United States were promised every year for twenty years.  Chief Washakie was among those who signed the treaty.

“Watching the Wagons” by Frank McCarthy

In June of 1868, the government called the Bannock and Shoshone to Fort Bridger to propose a new treaty which would keep both tribes away from the Union Pacific railroad and the Oregon Trail.  As the treaty talks continued, Washakie hoped for the land south of Fort Bridger.  This area still had game on it and was close to Fort Bridger where Washakie felt secure.  He soon realized the land the government had in mind was the Wind River Valley.  The Bannock, however, insisted on being given a reservation of their own.
On July 3, 1868 the Wind River Reservation was established, and on July 30, 1869, the Bannock were given their own reservation at Fort Hall.  The Fort Bridger Treaty of 1868 turned out to be the last treaty in which the Indians took an active part.
An agreement was made by Chief Washakie in 1870 to allow the Arapaho tribe, who had not yet been assigned a reservation, to spend a short time on his land until other arrangements could be made.  This was to last a lot longer than the government professed “short period of time.”
By the end of the nineteenth century Catholic and Episcopal missionaries had started missions on the Wind River Reservation.  Episcopal minister, Reverend John Roberts arrived in 1883.  Chief Washakie gave him land near old Camp Brown, now named Fort Washakie, on which to build his mission.  Catholic Jesuit priest, Father John J. Jutz, S.J. arrived in 1884 and founded St. Stephens Indian Mission.  In later years both faiths would build other churches on the reservation to better serve the people.
In less than 80 years the lifestyle of the Shoshone had completely changed.  But they have adjusted to the white man’s culture and through the years they have managed to keep their own identity and customs alive.  The Shoshone people of the Wind River Reservation are a proud tribe of American indians.